Taste of the Willamette Valley Overlook at Willamette Valley Vineyards. Red wines are dominated by pinot noir, but white are diverse.

More than 550 wineries scale the bountiful hillsides of Willamette Valley, lauded worldwide for premium pinot noir. Pinot gris, chardonnay and riesling are also top contenders. But the culture and heritage of Oregon Wine Country reach beyond the grapevines.

Visitors discover a wealth of culinary wonders inclusive of craft breweries and cideries galore, a celebrated farm-to-fork dining ethos and a James Beard-nominated chef. Between sips and bites are tales of Victorian-era pioneers and Nike athletic shoes, and a vibrant arts scene of masterful works and quirky street murals.

And no sales tax.

The six-county Willamette Valley in northwest Oregon is tucked between the Cascade and Coastal mountain ranges, south of Portland and an hour inland from the Pacific Ocean. Our road trip took us to the central part, the 50-mile stretch between Eugene and Albany. It’s a straight shot on I-5 or the more scenic OR-99W through Corvallis.

Eugene is a hip college town (Go, University of Oregon Ducks!) while Albany is a historic treasure with a sophisticated twist.

First, a lesson in vernacular: The proper pronunciation is “Will-AM-ett,” like “damn it.”

A Toast To Willamette Valley

Among our stops were Oregon Wine LAB, an urban winery and tasting lounge in Eugene. LAB stands for Local Artisan Brands, which are poured in addition to the William Rose house brand.

Springhill Cellars is a small but mighty family-owned winery west of Albany. It’s known for pinot noir and pinot gris, but also for tantalizing variations like port-style pinot noir and oaky rosé.

An early industry visionary is Jim Bernau, who founded Willamette Valley Vineyards in 1983. His first orchard, which he watered by hand, has grown to near 500 acres and a sterling reputation. Take a guided tour at the Turner estate headquarters, then relax with a tasting flight and lunch on the patio above the undulating landscape. Red wines are dominated by pinot noir, but whites are diverse. The white pinot noir is a divine compromise.

The 4 Spirits Distillery in Corvallis honors a quartet of fallen soldiers who served with founder Dawson Officer in Iraq. The military-themed microdistillery produces whiskeys, rums, cucumber gin, classic and flavored vodkas plus a menu of family-friendly pub fare. 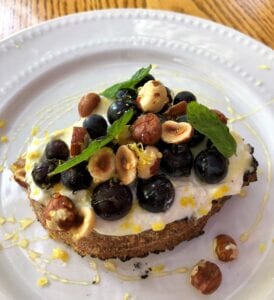 Chevre tartine with grapes and hazelnuts at Gathering Together Farm

The gastronomy of Willamette Valley ranks right up with its viticulture excellence. You’ll experience plenty of fine eating, both casual and upscale. Chefs and cooks proudly feature locally and sustainably grown and gathered edibles on their menus. Accompanied by Oregon wines, of course.

Fifth Street Public Market is a Eugene social hub with smart boutiques and a Sweet Cheeks Winery tasting room. At the French-inspired Marché bistro, you can dine in Euro-elegance or sit at the chef’s counter and watch your selections prepared. The heirloom tomato-and-melon salad and seared albacore tuna with fried lemon were braggable.

Other Eugene palate-pleasers: Off the Waffle is noted for authentic Liège waffles with sweet or savory toppings. Jazzy Ladies Cafe and Coffeehouse is a cozy eatery serving up scratch cooking and craft cocktails. Rye has an extensive menu of new regional classics and a strong belief in chocolate.

Gathering Together Farm in Philomath is a certified organic vegetable and fruit grower of 400-plus produce varieties, an extensive indoor produce market and a country chic restaurant.

At Sybaris Bistro in Albany, owner and chef Matt Bennett, a two-time James Beard nominee, makes his own bread, ice cream and catsup. The ever-changing menu depends on what farmers declare at the peak of readiness. Bennett adds classical preparation techniques. Hopefully, you’ll order the Don Ho dessert, a confection of caramelized pineapple, pineapple sorbet and pineapple foam. Because with Don Ho, you need tiny bubbles.

Another Albany fave is Vault 244, a former bank built in 1892 turned New American bistro with an eclectic menu of steaks and small plates. Many original architectural details integrate with the modern decor. 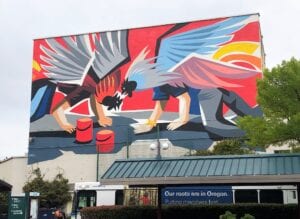 In Eugene, dozens of outdoor murals and sculptures by local and international artists deck the streetscape with color and imagination. Perhaps the most popular is Kesey Square, where bronze statues depict Ken Kesey, author of “One Flew Over the Cuckoo’s Nest” and a UO alum, reading to his three grandchildren. It’s called “The Storyteller.”

On the UO campus, the Jordan Schnitzer Museum of Art was established in 1933 to showcase an early benefactor’s Asian art collection. Its holdings have grown exponentially to include a diverse array of new media, contemporary, European and decorative works. As a pop culture aside, many scenes in the 1978 movie “National Lampoon’s Animal House” were filmed on campus. Alas, the infamous Delta fraternity house is no longer.

Fans of “The Simpsons” TV show should detour to neighboring Springfield, the model for creator Matt Groening’s fictional hometown. Take a selfie next to the lifesize mural of the cartoon family at Emerald Art Center and other recognizable icons in town.

Albany Historic Carousel and Museum. The caroiusel’s mechanics date to 1909

Take a spin at the indoor Albany Historic Carousel and Museum. The mechanics date to 1909, but the menagerie of horses, circus animals and mythical creatures was entirely carved and painted by a retinue of dedicated volunteers. Antique animals and carousel memorabilia are on display.

Our two hotels reflected the character of their locations and are well-positioned for sight-seeing.

Graduate Eugene is a collegiate-themed hotel with a nod to Nike. The sportswear company was co-founded in 1964 by former UO track and field coach Bill Bowerman and his star athlete Phil Knight. Dwarfing the lobby is a colossal wooden pull-toy of a duck, the university mascot.

In Albany, the 206 ½ Historic Hotel is a sweetly furnished 7-room Airbnb with a storied past. The 1900-ish Italianate building has seen life as a saloon, grocery store, boarding house and brothel. The hotel is on the second floor. Guests share 2 bathrooms, kitchen and living room. Natural Sprinkles Bakery and Margin Coffee cafe are on the street level below.